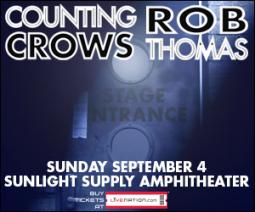 Counting Crows and Rob Thomas Team Up For Summer Tour

Two of music’s most captivating live performers will unite for their first time touring together this summer.  Multiplatinum-selling band Counting Crows and multiple Grammy Award winning singer and songwriter Rob Thomas announced a co-headlining tour today that will stop by Sunlight Supply Amphitheater on September 4th.

For Counting Crows, the tour announcement comes on the heels of their recent news of an exciting run of European shows, which includes a coveted opening slot for Bruce Springsteen and the E Street Band in Rome, Italy.  Praised as “one of the most popular and easily identifiable rock groups in America (NPR)”, the band will be performing hits from their complete discography spanning the past two decades. Counting Crows’ latest release, 2014’s ‘Somewhere Under Wonderland’, earned critical acclaim as one of the “band’s best” and scored a top 10 debut. The album was recognized as one of the group’s “stronger works (USA Today)” and claimed a spot on Rolling Stone’s Top 50 Songs of the 2014 list with the track “Dislocation”.

The upcoming tour celebrates Rob Thomas’ 3rd solo effort, The Great Unknown, which was released last year.  The album had a Top 10 debut on the Soundscan/Billboard 200 chart and earned critical acclaim on its arrival.  Rolling Stone hailed Thomas as “the same consummate pop-rock craftsman who has been making it all sound so smooth for years…Thomas piles on the hooks right from the opener.” The Great Unknown was produced by a remarkable roster of studio all-stars including longtime collaborator Matt Serletic, Ryan Tedder (OneRepublic, Taylor Swift, Beyoncé), Ricky Reed (Jessie J, Jason Derulo, twenty one pilots), and Shep Goodman & Aaron Accetta (American Authors) and features the hit single, “Hold On Forever” as well as the soon-to-be released “Pieces.”

"Twenty years ago Rob and I were like kids running around Italy in the middle of the night getting drunk and playing gigs. I still love nothing more than touring with my friends. This is going to be a great summer,” said Adam Duritz.

"Music is about good friends getting together and celebrating life. Our fans are going to be doing that in the audience and we will be doing that on stage as well. Bring on the summer!" said Rob Thomas.

Tickets for the September 4th show at Sunlight Supply Amphitheater go on sale Friday, April 15th at 10 am.