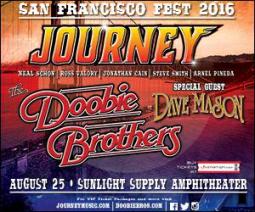 Journey and the Doobie Brothers will bring the San Francisco Fest Tour 2016 tour to the Sunlight Supply Amphitheater on August 25th, bringing together two of the iconic groups that helped define the "San Francisco Sound."  The tour, includes special guest Dave Mason and  tickets go on sale to the general public Saturday, December 5, 2015 at 10:00 AM.

Neal Schon (founding member and lead guitarist), original member Ross Valory (bass), and longtime members Jonathan Cain (keyboardist) and Arnel Pineda (lead singer), are welcoming virtuoso drummer Steve Smith back into Journey, marking the first time he will perform with the band since 1998.  Schon and Smith have always remained close friends and musical collaborators. Smith has lent his incredible talent to several of Schon’s solo albums, including critically acclaimed The Calling, and, most recently, Vortex.

Schon was thrilled when Smith accepted his invitation to rejoin JOURNEY, exclaiming, “I'm so looking forward to the very exciting 2016 we have planned, starting with my ‘Neal Vortex Schon’ Japan tour in February and then our major summer tour with The Doobie Brothers and Dave Mason.  We will see you all soon!”

The Doobie Brothers' Tom Johnston (founding member, vocals/guitar), Patrick Simmons (founding member, vocals/guitar), and longtime member John McFee (guitars/strings/vocals) are adding Little Feat co-founder, Bill Payne, to their band on the 2016 tour. Payne performed on many of Doobie Brothers studio albums as well as on the road; a relationship the band is looking forward to rekindling.

“It’s gonna be a great summer for fans of Bay Area music, and for guys like us who have the pleasure of teaming up with our good friends from Journey and the Dave Mason Band,” said Tom Johnston and Patrick Simmons of The Doobie Brothers.

“We look forward to taking the stage with Journey. We love their songs, and think we will all complement each other musically.  It is going to be a powerful tour. We can’t wait to share it with the fans!”