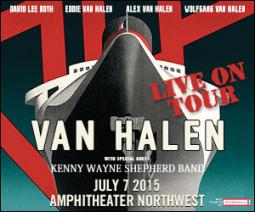 We are proud to welcome Van Halen with special guest Kenny Wayne Shepherd Band to Amphitheater Northwest on Tuesday, July 7, 2015. Formed in Los Angeles in 1974, Van Halen changed the rock and roll landscape forever with the release of their self-titled, 1978 debut album and subsequently produced a repertoire of hits that remain some of the strongest and most influential rock songs ever written that fans will admire for decades to come. With more than 75 million albums sold worldwide, and more No. 1 hits on the Billboard Mainstream Rock chart than any other artist, the band's record of achievement is hard to top. The eponymous debut album and 1984 were both certified Diamond, for U.S. sales in excess of 10 million, placing them on an elite short list of double RIAA-certified Diamond Award honorees.Van Halen was inducted into the Rock and Roll Hall of Fame in 2007. Tickets are on sale Saturday, April 4th at 10 AM.
Back To News